What if the world came to an end and no one noticed? 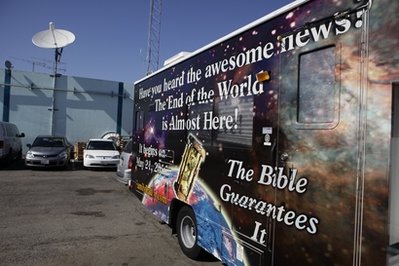 (AP Photo/Marcio Jose Sanchez)
While driving past the Shell gas station in my hometown of Silverthorne, Colorado a few days ago I noticed an unusual sight: four identical motor-homes were lined up side-by-side, refueling for the long journey ahead. Each of them bore enormous banners on three sides that read:
“Have you heard the awesome news? The End of the World is Almost Here! It begins on May 21, 2011,” and confidently “The Bible Guarantees It!”
I watched as these four RV’s, the once-triumphant heralds of the apocalypse, slunk down the road in a silent caravan. They appeared exposed and humiliated by the obvious fact that nothing had changed during the week since Harold Camping’s day of doom had come and gone.
While Harold has met his own doomsday of sorts, becoming the subject of ridicule and even being labeled a false prophet, I wondered at that moment: What if Harold’s apocalypse is not a sudden cataclysmic event, but a slowly unfolding transformation that takes place over time? What if the world, as we have known it, has actually come to an end, but none of us even noticed?
When I looked up the word “rapture” in the dictionary I found that it can mean “a mystical experience in which the spirit is exalted to a knowledge of divine things.”
Perhaps this elevated knowledge of the divine can be transmitted very subtly and gradually across time and space so that it is barely detectable in any given moment.
Perhaps it is the ego-driven aspect of the world that is coming to an end, with its two trademark manifestations: greed and fear.
Perhaps each of us is being “raptured” in this very moment, called to see our planet, our existence and our own holiness through new eyes.
Perhaps, as humankind, we are slowly being lifted from the mire of our selfishness and isolation to recognize our connection to all of life.
Even if this shaky supposition of mine were true, it would be a long time before the confirming evidence would become visible. Until we could find proof that the old world has come to an end, we would have to function each day as if we knew we were meant to see a higher perspective and meant to drop our old blind ways of being.
We would have to trust enough to let go of our fear and greed and instead, embrace love and forgiveness.
We would have to live each and every day as if it were the ultimate, most glorious day ever to exist, and even, perhaps, the last day to exist.
Yes, if the egoic world really has come to an end, we may not know it for a very long time, but we could live as if it were true anyway. Wouldn’t that indeed be awesome news?