How an Angel Named Safyre is Saving the World 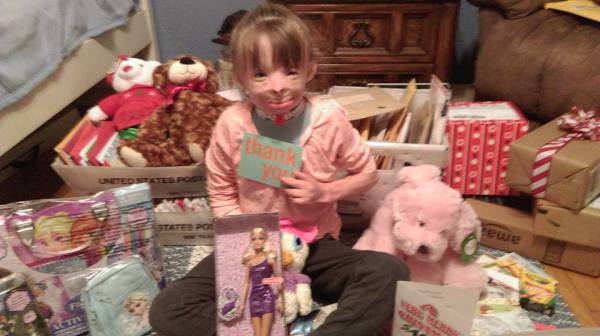 This week I have been following the story of an 8-year old girl named Sa’fyre Terry from Schenectady NY who was seriously burned in a house fire three years ago. That fire took the lives of her father and three siblings, but Sa’fyre miraculously survived because her father shielded her tiny body with his own.

Sa’fyre now lives with her aunt who helped her post a photo on Facebook, stating that this year for Christmas she would like to receive cards from around the world. The post went viral and Sa’fyre has now been inundated with cards, letters and gifts from all over the globe.

In a world fraught with brutal terrorism, economic inequality, hate-filled political rhetoric, disastrous climate change, centuries-old religious wars, and paranoid racial and ethnic bigotry, little Sa’fyre has been able to unite the planet with her simple, innocent request. She has ignited compassion in hearts everywhere and reminded us that mankind is basically good and kind.

While we are exposed every day by the media to the differences between “us and them” and the reasons we should hate and distrust one another, Sa’fyre has managed to find a common thread of lovingkindness that we all share and in which we can rejoice this holiday season. She has succeeded in bringing the citizens of the world together when all other attempts have failed.

Even as many of us have stepped forward to be of assistance to this little girl, the truth is that she has helped us, by restoring generosity, love, and humanity to an inhumane world, during a time when those qualities are most needed.

During my meditation this morning I was given a vision: I saw Sa’fyre reaching out and clasping hands with women who have been disfigured by acid attacks in India and Pakistan, who in turn took the hands of victims of tribal war atrocities in Africa, who reached out to the survivors of natural disaster all over the world, who held hands with those who are suicidal and in despair, who reached for the homeless and displaced of the world, who clasped hands with those sick and in pain, who connected with those who have done harm to others, and on and on…

From my Galaxy view I saw the 7.3 billion people of this planet all joined as one, hand to hand; and 7.3 billion hearts beating with the same rhythm; and 7.3 billion souls shining forth with One Light and One Love. We are One Being. We are not separate. We will only save the planet and our own lives when we finally grasp this fact. We must work together by finding our common ground, our basic humanity. This is a concept so simple that only a little child can lead us there … a child named Sa’fyre who has come to save the world.