What Does Dignity Really Mean at the End-of-Life? 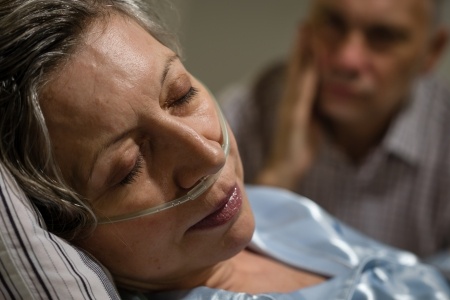 Our society is currently struggling with the concept of “death with dignity” as we try to understand what it really means to die a dignified death. In order to find common ground for this conversation it is helpful to consider the original meaning of the word “dignity” from its Latin derivation--the root word dignus, which means “worthy.” So from this perspective to die with dignity means to have a sense of self-worth and value up until the last breath of life.

This concept of dignity was first introduced to me when I was practicing as a hospice medical director. At that time one of the hospitals in our community had a huge mural on the wall that featured their mission statement:

“Care must be taken of the sick as if they are Christ himself.”

Each time I entered that hospital I would see that slogan and be reminded of the humility and compassion that are required of all who care for the sick and terminally ill. We must cherish and support each patient’s sense of worth, regardless of diagnosis or circumstances, in order to preserve dignity at the end-of-life. We must see the sacredness of each life we touch.

One of my hospice patients at that time, Andy, was dying from a malignancy that had developed on the side of his nose and spread to eat away half of his face. The invasive cancer had left a ghastly, gaping hole where his cheek and upper jaw had once existed. Andy covered that part of his face with a dressing of gauze and tape and would allow only a few people to see what was hidden underneath.

His suffering was intense because the gradual erosion of his facial tissue by the cancer caused tremendous pain. But he was not at all bitter or angry about his situation: he accepted it as part of life. His goal was to live as long as possible to watch his children grow up and his tremendous love for them was visible in the way he glowed when he spoke of them.

Andy was an inspiration to me and to everyone who spent time with him. He managed to live for one year after his admission to hospice, though he had been expected to die much sooner. Over the course of that year I visited him many times and found myself in awe of his equanimity and his capacity for love. Shortly before he died I helped him change the gauze on his face because he had become too weak to do it himself.

As I removed the dressing and saw for only the second time the necrotic wound left by his skin cancer, Andy said, “I’m sorry you have to see my ugliness.” With tears in my eyes I responded, “Andy, you are the most beautiful person I have ever met.”

Indeed, Andy lived each moment of his life with great dignity, despite the increasing disfigurement caused by his cancer. He valued life and love above all else and those who cared for him responded by valuing him and preserving his sense of worthiness throughout the entire end of his life.

A few months later I had a dream that I was visiting Andy in a nursing home and found him whole and healthy, standing next to the bed and looking down at his own cancer-stricken body. He smiled and said, “I came to tell you thank you. You cared for me like God.”

This then for me is the essence of dignity at the end-of-life: for each dying patient to be cared for like God, like Christ himself; to be so loved and cherished that he knows he is valuable, that she knows her unmistakable worth. To attain dignity at the end-of-life is to be seen and loved for exactly who you are, to be honored for your uniqueness.

When we begin our care of the dying with such a definition of dignity, then we will truly help each patient determine the best way to live out those final days. For some the burden of suffering at the end of their illness may be too great to bear—their sense of self-worth and value may require them to control the timing and means of their own death. For others, like my patient Andy, living and dying with dignity may involve holding on for as long as possible to be with those we love.

Our task as hospice workers is to support our patients on their unique end-of-life journeys and honor their choices and perspectives. We must learn to become perfect mirrors for them, reflecting back to them their worth and value so that they can always maintain dignity, regardless of the paths they choose. Our work then comes down to this: polishing our “mirrors” so that the reflections we offer our patients are clear, true and without bias.

Please add your voice to this conversation by joining the “Choices and Dignity in Dying Symposium” at End-of-Life University. This online event will be free of charge March 12-14, 2015. Your thoughts and opinions are welcome and needed. Visit this page to learn more: http://www.eoluniversity.com/special-events

(Dr. Karen Wyatt is a hospice and family physician and the author of the award-winning book “What Really Matters: 7 Lessons for Living from the Stories of the Dying.” She is a frequent keynote speaker and radio show guest whose profound teachings have helped many find their way through the difficult times of life. Learn more about her work at www.karenwyattmd.com.)