Why is it so hard to forgive? 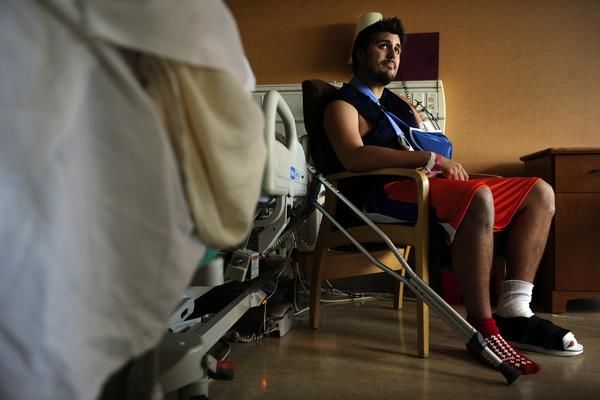 One of the survivors of the Aurora theater massacre has told The Denver Post he has already forgiven the shooter, James Holmes, for wounding him. While the victim, Pierce O’Farrill (pictured above), was fortunate to have non-life-threatening injuries, it is still remarkable that he bears no resentment toward the man who committed the heinous crime on July 20, 2012.

Most of us would have to struggle with anger and bitterness for a long time before achieving forgiveness in a situation like this, particularly when the act was premeditated and so cold-blooded. In fact, for many it is difficult to forgive even small slights such as being cut off in traffic or ignored by a friend. O’Farrill’s ability to let go of resentment is remarkable because it is a rare accomplishment in our society.

But why is forgiveness such a difficult act for us to carry out? Why would we choose to hold on to hostile feelings that cause us pain and can eventually destroy us? The short answer to that question (and there are many possible long answers) is that our egos cannot tolerate the idea of letting someone “off the hook.”

While compassion and forgiveness come naturally to the soul, the ego has a much different relationship with wrongdoing, and, unless we are spiritually enlightened, the ego is generally in charge of how we think and behave. One of the primary concerns of the ego is to prevent us from being humiliated when things go wrong. This is accomplished, in part, by holding on to blame toward others when they are at fault and, sometimes, blaming them when they are not at fault.

When there is another person to hold responsible for a bad outcome, the ego is comfortable because it can direct all criticism toward that other person and avoid any humiliation. To forgive another person, especially one who is clearly at fault, makes no sense to the ego. Being wrong always deserves punishment, according to the ego, which views everything as either black or white, good or bad.

The soul, however, has a higher view of life and a different function, which is to foster understanding and peace both internally and in the external world. The soul is less interested in placing blame and more interested in restoring harmony, even when a terrible crime has been committed, such as the shooting in Aurora.

But which aspect of the self is correct: the soul or the ego? Surely a mass murderer deserves punishment for his crimes, there can be no doubt about that, so the ego must be correct in placing blame. But the soul would still argue that there is room for compassion. And forgiving Holmes, as O’Farrill has done, will not lessen the severity of the shooter’s punishment. Forgiveness will simply allow O’Farrill to go on with his life free of hatred and poisonous anger.

What the soul knows and the ego cannot comprehend is that forgiving someone else lets you off the hook, not the wrong-doer. Practicing forgiveness toward another person is actually a way of taking care of yourself and freeing you from harmful negativity. But, for most of us, the ego has control and directs our thoughts and behaviors while the wisdom of the soul is ignored. Without guidance from the soul, forgiveness is a nearly impossible task because the ego alone is not capable of carrying it out.

But forgiveness is a skill that can be practiced and learned over time, even for the most hard-hearted among us. Pierce O’Farrill has obviously done some soul work and has mastered the art of forgiving another. Let us pause in the midst of our shock and pain and search for the courage to follow in his footsteps.