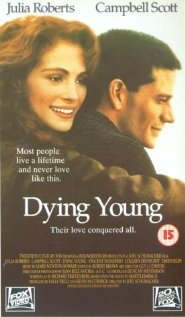 Dying Young is a touching end-of-life movie that demonstrates the power of love and connectedness to transform both life and death. The 1991 film directed by Joel Schumacher stars Campbell Scott as Victor Geddes, a 28-year-old man from a very wealthy family who is suffering from leukemia, and Julia Roberts as Hillary O’Neil, a young woman he hires to help care for him while he undergoes chemotherapy.

The story depicts Victor’s struggle with treatment for his cancer and the relationship that develops with Hillary as she attempts to help him endure this nightmare. While Hillary comforts him through the terrible side effects of chemotherapy, covering him with blankets, wiping his brow, holding him when he is in pain and cooking healthy food for him, the lonely Victor gradually falls in love with her and regains his will to survive.

Victor has been starved for love most of his life since his mother died when he was just nine years old and his wealthy father, away on business much of the time, simply hired people to care for him. Unable to foster and maintain normal relationships because of his illness, Victor must initially pay Hillary to provide him with compassionate care, but Hillary is gradually drawn to Victor herself and becomes personally committed to his survival.

Eventually Victor, longing for a more normal relationship, lies to Hillary by telling her that his chemotherapy course is finished and convinces her to run away with him to a beachfront house on the coast of Northern California. There Victor seems to improve day-by-day and the two begin conducting their relationship as a couple rather than as an employer and employee or patient and nurse.

But the fantasy must come to an end when the symptoms of Victor’s leukemia overtake him once again. When Hillary realizes that Victor lied to her in order to get her help in running away from treatment, she becomes angry and decides to leave him. Victor’s father arrives to force Victor back to the hospital for treatment, but Victor loses his will to live without Hillary in his life and plans to run away again to die alone rather than endure more treatment.

Finally Hillary realizes how much she loves Victor and returns to convince him to resume treatment, reassuring him that she will remain by his side whether he lives or dies. Her devotion once again provides Victor with the strength he needs to suffer through more chemotherapy and the audience is left with uncertainty as to the outcome.

We are not told what the future holds for Victor and Hillary, which is really the perfect ending for the movie. Because what really matters is that each of them has found deep, lasting, heart-breaking love and allowed their lives to be transformed by love, which is the essence of our purpose for this life.

The movie portrays this process well, though it has definite shortcomings, such as believability of the characters, pacing of the story, missing a sub-plot and failure to maintain viewer interest. Both characters, Victor and Hillary, lacked the depth and substance that would have made them compelling and captivating to the audience. Nonetheless, Dying Young is worth viewing simply for its portrayal of the unstoppable aspiration of love that blossoms in the midst of hopelessness.