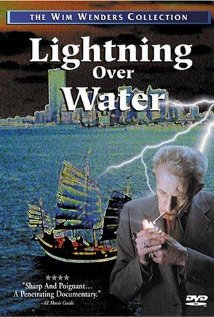 This 1980 documentary, which was co-directed by Nicholas Ray and Wim Wenders, chronicles the last few months of Ray’s life as he was dying from lung cancer. Wenders was a former student whose directorial style was deeply influenced by Ray, famous for his movie Rebel Without a Cause.

In this film, Wenders agrees to help Ray make one final movie before he dies. Ray intends to make a fictional film about a painter who is dying of cancer and wants to restore his good name and reputation before he dies. However Wenders convinces him to tell his own story in the film rather than trying to create fiction.

This brings up a key theme of the movie, which is fantasy vs. reality. When Ray is shown lecturing to a group of film students shortly before his death, an audience member asks him “Is art reality or fantasy?” In truth, Lightning Over Water is Ray’s attempt to depict reality using the art of film, however the process of creating the movie seems to distract him from his own reality of dying, which becomes the compelling, undeniable back-story of the picture. Wenders himself muses that it is only during review sessions when he sees what has been captured on film that he recognizes that Ray is in the process of dying – an awareness that Wenders finds “terrifying.”

So throughout this movie, which was largely filmed by a crew that hung out for weeks inside Ray’s apartment, the audience sees both the process of making the film and the product of their efforts as it unfolds. This blending of reality and the projection of reality is somewhat disturbing and confusing as the entire cast, which is also the crew, is more comfortable discussing the film than the actual dying process that is occurring in their presence.

During Ray’s lecture to the film students he shows them clips of a movie that remained unfinished at the time of his death: You Can’t Go Home Again. This title is also a prophetic message for Ray who longs to go back to the days when he was a well-respected director, but realizes it is impossible. He hopes to restore his image and self-esteem before he dies, but struggles to understand the meaning of his life. For him, Lightning Over Water becomes the one project that will tie up the loose ends of life and allow him a peaceful death, much like the function served by the playground project for Watanabe in the movie Ikiru.

Ray also describes for the film students how he is making his new movie, Lightning Over Water: by writing only a few pages of script at a time and allowing the story to unfold gradually, so that the ending of the film continually rewrites the beginning as it progresses. In this way, the making of this movie about his own death is rewriting Ray’s life and providing a new context for his accomplishments and career, which is why it has become such a compelling task for him right up until the end.

Through Wenders’ narration of the film he reveals his own discomfort with death and his fears that the making of this movie might be hastening Ray’s demise. Then he reads aloud from Ray’s diary, which was given to him by Ray’s much younger wife Susan: “How do you deal with fear? With love … and head on.” Thus the film follows Wenders’ journey also as he must confront an ending to this story that he would prefer to avoid. But he carries on with love for his teacher and finishes the project, which he refers to as “Nick’s Film.”

The movie ends with the crew sailing slowly through the harbor on a Chinese junk, to honor Ray’s wishes that he end his movie and life by sailing off to China. In a scene reminiscent again of Ikiru, the cast/crew drink sake and discuss their admiration for Ray during this combination wake and wrap party for the movie.

I can’t say I enjoyed watching this movie for it was painfully slow and quite confusing at times. But the images presented in the film have hung in my memory and given me a great deal to think about, which is always a valuable quality. While I would have preferred that the film show the struggle and transformation of the dying process more directly, it did capture the truth that dying is unique and individual for each of us, even though it is also universal. Lightning Over Water is challenging to watch but could be useful for a class or discussion group to dissect and explore together, particularly with the guidance of a knowledgeable leader.