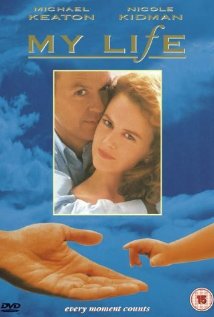 You must see this movie. I liked it so much that I’m placing my recommendation for it right at the beginning, just in case you don’t read the entire review. My Life has the power to change how you view your life, your relationships and your death and should not be missed.

This 1993 film, written and directed by Bruce Joel Rubin, is a powerful portrayal of the last few months of life for Bob Jones, a shallow, ingratiating public relations expert (played by Michael Keaton) who is dying of metastatic renal cancer. Bob is in his mid-30’s and happily married to Gail (Nicole Kidman) who is pregnant with their first child. The movie traces the course of Bob’s illness and the many transformations he makes as a person while facing his own mortality.

Bob begins recording a series of videos for his unborn child, hoping to leave behind documentation of his life and personality and also as a means for teaching his child certain life lessons. Michael Keaton’s comedy style shines in these brief vignettes as he talks frankly about life and all it’s ups and downs, from coping with loss to how to meet people, cook spaghetti, shave, and jump-start a dead car battery.

When Gail convinces Bob to consult with a Chinese healer, he begins to see himself in an honest light for the first time. The healer, a gentle old man who feels energy with his hands, tells Bob that he is holding onto too much anger and it is poisoning him. Bob is forced to look within and recognizes that some of his anger comes from his childhood and disrupted relationships with his family.

Bob and Gail return to his childhood home for his brother’s wedding where Bob hopes that he can resolve some of his anger. But he is really hoping that his family will change rather than being willing to change himself, so he leaves disappointed and still holding onto anger. The Chinese healer reminds him once again that he must learn how to forgive.

A turning point occurs when Bob visits the obstetrician with Gail and sees their unborn son on ultrasound. For the first time he becomes excited about the upcoming birth, which he had distanced himself from previously, and begins to support Gail and help her prepare for the birth. His only prayer is that he be allowed to live long enough to see the baby’s birth.

Indeed he does live to see his son and participate in his first months of life. This provides some of the most poignant moments of the movie as Bob cherishes every little moment with his newborn child and continues filming his brief videos full of all the wisdom he longs to share.

My Life is funny, touching, uplifting, heartbreaking and transformative all at once. The power of forgiveness and the hard work it takes to let go of anger are portrayed in a very realistic manner. Bob’s spiritual growth over the months as he copes with his looming death is inspirational and healing to witness.

As Bob whispers to his son Brian while he sleeps in his crib, “Dying is a really hard way to learn about life.” But Bob does learn during the course of this movie how to focus his waning life energy on the things that matter and how to find meaning in his final days. And the viewer is given the same opportunity, to contemplate what needs to be healed in life and to celebrate every moment with humor, joy and love.