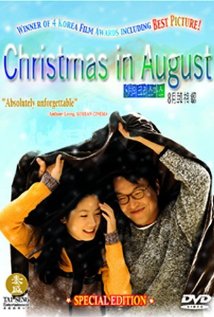 Christmas in August is a 1998 S. Korean film by Jin-ho Hur that tells the story of a businessman, Jung-won who learns he has a terminal illness then falls in love with a young customer of his photo shop, Da-rim. The movie, viewed with subtitles, is short on dialogue and has many lovely visual scenes that portray the relationship between the two as it develops.

Jung-won is a young man in his 30’s and the audience learns of his terminal diagnosis only through conversation when his former girlfriend mentions that she heard he is sick. Though he is shown visiting a clinic on two occasions there is no dialogue to reveal the nature of his illness or the length of his prognosis. Meanwhile, Jung-won proceeds with his daily life at his photo shop where he soon meets Da-rim, a lovely young traffic cop with whom he shares an immediate attraction.

Jung-won seemingly carries on two separate lives as he spends time with Da-rim, never revealing his illness, simply enjoying small moments of pleasure. Only when he is alone does the audience see him struggle with emotional pain. It is clear that his family, his father with whom he lives and his sister who comes for a visit, are aware of his diagnosis but there is no conversation between them about death and dying.

In one poignant scene, Jung-won awakens in the middle of the night to the sound of a thunderstorm. He turns on the light and looks out the window, seemingly frightened. He then goes to his father’s room and climbs into bed next to the sleeping old man, seeking just a moment of comfort.

In a later scene, Jung-won tries to teach his father how to use the remote control to watch a movie on the VCR, rrealizing that he will have to do this for himself in the near future. This begins a series of notes and explanations Jung-won composes for all of the machinery in his photo shop, as he prepares for the reality that someone else will need to take it over someday.

Interspersed with these scenes, the relationship with the unsuspecting Da-rim develops as the two go to an amusement park, walk in the rain and share ice cream from the carton. But soon, Jung-won takes a turn for the worse and has to be hospitalized. When his photo shop remains closed for several days, Da-rim has no idea why he is gone and becomes despondent. She leaves a hastily scribbled note inside the door and walks away in tears. T

his lack of communication between characters about death and dying was quite disturbing to me and I felt sad and unfulfilled at the end of this film. While it contained many sweet and poignant moments, it seemed to be lacking the elements of transformation and healing that are possible at the end-of-life.

In fact, for me the saddest moment of this movie occurred when Jung-won was crying all alone in his bed one night. His father stood outside the door listening and, for a brief second started to reach for the door handle, then hesitated and slowly walked away. The pain of both men was tangible but it was never released or resolved through the remainder of the film.

Perhaps there are cultural differences in the understanding of death and dying that explain why this movie felt to me like a partial and unfulfilling view of the end of one man’s life. I have come to expect these end-of-life movies to shine the light on ignorance and promote more awareness and open dialogue about this subject, but Christmas in August fell far short of that expectation.

However, to give some credit to the movie, perhaps it serves a role by portraying what needs to change in the approach to end-of-life and why it needs to change. At least in the very last scene of the movie, Da-rim returns to the photo shop wearing black clothing to signify mourning. There she sees in the window a framed photograph of herself, Jung-won’s last act as the shop owner, a simple expression of his love for her. She walks away with a sad but knowing smile on her face.

Certainly these struggles of life and love and death are challenging to live and impossible to truly capture on film. See Christmas in August for a haunting reminder that there are many ways to approach your final days.