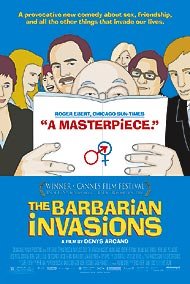 This 2003 French-Canadian film directed by Denys Arcand is an intelligent and cynical look at various aspects of the end of life, including relationships, politics, the healthcare system, family and the meaning of life itself. The story, which takes place in Montreal, centers around Remy, a radical socialist university professor during his final days battling cancer.

The title “The Barbarian Invasions” has multiple meanings, from the physical invasion of Remy’s body by cancer to the emotional invasion of his life by his “barbarian” capitalist son to the tragedy of 9/11/2001, which was used as a backdrop for the entire movie. In one scene a television news anchor opined that the terrorist attacks on the World Trade Center represented the first “barbarian invasion” against the American Empire, likening it to the invasions that ultimately brought about the fall of the Roman Empire.

These political references occur throughout the movie as Remy and his friends and family members discuss together the meaning and significance of life. Remy views the history of humankind as unfolding through one atrocity after another and tragically seems to view his own life in much the same way.

Upon the arrival of Remy’s estranged son Sebastien, a wealthy investment banker from London, a conflict arises between the two men who don’t agree on politics or economics and who have no respect for one another. But Sebastien’s attitude toward his father softens when his mother points out examples from childhood of his father’s genuine love for him. Sebastien decides to stay and to make his father’s dying days as comfortable as possible.

Using his monetary resources, Sebastien arranges for a private room for his father on a vacant floor of the hospital then calls together several old friends of his father to rally around his bedside. Sebastien also learns that heroin will provide the most effective pain relief for Remy and pays a young female junkie, Nathalie, to supply and administer the drug to his father.

With Remy relatively free from pain and in more comfortable surroundings we get to see his personality emerge through his discussions with his friends. He is portrayed as a man who loves life, particularly wine, women and music, and who has indulged himself in all three of those things on a regular basis. He has also been passionate about leftist politics and supported numerous causes throughout his life.

But as he faces the end of his days, Remy agonizes at times over the purpose of his life, wishing that he had written something of value or accomplished something more. He searches in vain to find meaning in this existence but is unable to see it for himself.

One of the more touching aspects of the movie is the relationship that develops between Remy and Nathalie, the junkie who brings him heroin, as each of them struggles with the emptiness of life. He confesses to her that he is afraid to die and sees his life as a failure. She points out that he is living in the past rather than the present, and the past is already dead. In another conversation, Remy advises Nathalie that someday she herself might value life more when she sees it slipping away from her.

Ultimately Sebastien arranges to move Remy and all his friends to a lake house for his last days. Remy’s daughter, who is sailing around the world on a yacht sends a farewell video to her father by satellite and thanks him for passing his lust for life on to her, providing Remy at last with a sense that his life did have value and purpose.

In an emotional scene, Remy says goodbye to each one of his friends and family members then Nathalie administers a lethal dose of heroin to end his life. In the final scenes of the movie, Nathalie begins treatment with Methadone to get off heroin and Sebastien allows her to move in to his father’s old apartment, underscoring the message that Remy’s death helped save Nathalie’s life.

The Barbarian Invasions is a thoughtful and provocative movie even though it is disturbing as well. There are moments of absurdity, hopelessness and pain counterbalanced with redemption, passion and transformation. This movie would provide excellent material for a discussion group on the end of life as it introduces multiple controversial issues on the subject.