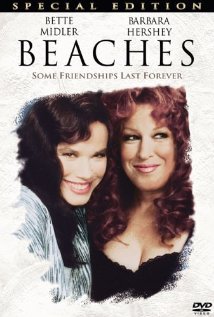 The 1988 Garry Marshall film, Beaches, tells the story of two very different women who have been penpals and unlikely friends since childhood. C.C. Bloom, played by Bette Midler, is a struggling entertainer who carries on a turbulent relationship with Hillary Whitney, a wealthy attorney portrayed by Barbara Hershey.

The movie chronicles their friendship over the years as they each pursue love and career with varying degrees of success. The two women clash with one another when they both fall in love with the same man and become estranged temporarily until life brings them together once again.

When Hillary becomes pregnant just before discovering that her husband has cheated on her, C.C., who is also recently divorced, steps up to offer support to her needy friend. From this point on the two remain close, even while C.C. pursues her successful singing career.

Then in a sudden turn, Hillary is diagnosed with viral cardiomyopathy and learns that her rare tissue type makes her an unlikely candidate for a heart transplant. Knowing that she is dying, Hillary is desperate to find a safe and loving home for her daughter Victoria after her death. She asks C.C. to accompany her and Victoria to the beach for one last summer together.

While the three share a house on the beach we see each of them struggle to deal with the reality that Hillary’s life is coming to an end. Hillary urges C.C. and Victoria to form a relationship but then becomes jealous and depressed when she sees them play with one another. She experiences anger at times and becomes withdrawn until C.C. confronts her and encourages her to become more engaged in life. Finally the two friends share some touching moments, playing cards and laughing together.

When the end arrives for Hillary, C.C. manages to get to her bedside in time by canceling a performance and driving all night in the rain. She helps Hillary get home to the beach house for her final few days of life and comforts Victoria, who ultimately chooses to live with C.C. following her mother’s funeral.

This movie centers primarily on the life stories of its two main characters and uses the end-of-life scene to culminate and celebrate their relationship, so death and dying is not really a theme. However, the portrayal of Hillary’s last days is realistic and cathartic as far as it goes, revealing the importance of love and forgiveness at the end of life.

Bette Midler’s song “Wind Beneath My Wings” is one of the highlights of the death scene and beautifully reveals the gratitude those left behind feel for the lives of the departed. This movie serves as a reminder to cherish relationships – even those that seem strained or burdensome at times – for they will be treasures some day in the future when life is coming to a close. Beaches also demonstrates that cultivating boundless forgiveness is the path toward preserving and healing the precious connections with others that form throughout our lives.