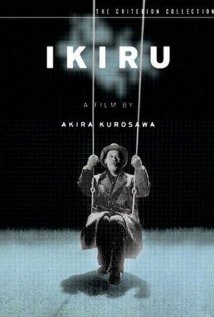 "I can't afford to hate people. I haven't got that kind of time."

Most likely you would have to be a die-hard fan of the Japanese film director Akira Kurosawa to have heard about or seen this movie. Ikiru was released in 1952 in black-and-white with English subtitles, but it is a classic film that presents the subject of death and dying with rare insight and depth along with its commentary on bureaucracy and government hypocrisy that is present in many of Kurosawa’s creations.

Ikiru, which literally means “to live,” tells the story of Watanabe, a miserly and miserable man who works as Section Chief in the Public Affairs Office, mindlessly stamping papers all day long. When Watanabe is diagnosed with stomach cancer he confronts his mortality with the shocking realization that he has not really been alive for the past 20 years – since the death of his wife.

Watanabe then goes on a journey, trying to discover how to live while he still has a few months left. He first encounters a writer who tells him to “be greedy about living” and takes him to bars and clubs where they drink and dance with loose women. But Watanabe soon realizes that this is an empty pursuit and not really living at all.

Next he connects with a young woman from his office who seems to be full of life and joy. Fascinated by her, Watanabe takes her out for dinners, movies and ice-skating until she confesses that he makes her uncomfortable because she can’t figure out why he wants to be around her. Watanabe has told no one about his cancer diagnosis but finally shares it with her, to find that she is shocked and not able to be supportive. He confesses that he just wants to know how to live and she responds that he try “making something” to counteract the mindless and futile work of his public office. With that suggestion, Watanabe’s face lights up with inspiration as he finally has a vision of what he should do with his final days.

At that point Watanabe takes over a project to help some local women create a playground in their neighborhood where a cesspool currently exists. But the movie suddenly transports us to five months into the future, the day after Watanabe’s death, when his family, coworkers and public officials are holding a wake for him. The rest of the movie consists of flashbacks of the events of the previous months that allow the viewer a glimpse into Watanabe’s process of transformation before his death.

We learn that Watanabe was indeed successful at creating the playground, after months of wrangling with city bureaucrats over the approval and execution of the project. While the city leaders take credit for the completion of the park, Watanabe’s coworkers recall his unwavering determination and dedication to the task, marveling at how inspired he had been. Eventually they recognize that though they did not know that he was dying of cancer, Watanabe himself surely did know that he had little time left and that knowledge was the source of his passion for the park.

Some interesting points are made in this movie, which seem all the more remarkable because of the time period in which it was made. During the 1950’s a diagnosis of cancer was stigmatized and hidden, just as portrayed in this movie, and the subject of death was also rarely discussed or addressed. Kurosawa displayed remarkable foresight and courage to confront these issues on the screen since they were hardly popular topics for his day.

Two salient moments of the film still resonate with me now. In one flashback when Watanabe is asked by his assistant how he can tolerate being treated badly and disrespected by the government officials with whom he is negotiating, he replies, “I can’t afford to hate people. I haven’t got that kind of time.” And in another scene, Watanabe’s coworkers suddenly realize that they too could die at any time and pledge to live their lives with the same passion and commitment they saw from their friend during his last days.

In the movie, Watanabe’s last moments of life take place in the park he worked tirelessly to build, as he swings back and forth on a playground swing late at night, with snowflakes swirling around him. He is smiling a peaceful and angelic smile as he sings a song to himself, “Life is Brief,” a haunting reminder to live now and enjoy every moment.

Watching this film takes some effort since it is 21/2 hours long and the subtitles are tiring, but I found it to be worth a viewing. Right now in our society the message of Ikiru rings true more than ever: We can’t afford to hate; we haven’t got that kind of time.