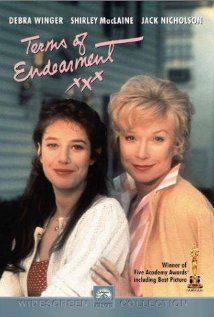 I have never forgotten the impact “Terms of Endearment” made on me when I first saw it nearly 30 years ago. I was young and single, had never had children and had never lost someone close to me other than my grandparents. This movie stunned me and confronted my sense of immortality with its story of the death of a young mother. That’s why I was interested to watch it again for this review – to compare my reaction to the movie now after living so much life in between the viewings.

This 1983 film directed by James L. Brooks depicts the difficult relationship between Aurora Greenway and her daughter Emma. The movie is really a chronicle of the lives of the two women and deals with death only at the very end, though the death scene is the only one I remembered from my first viewing.

Aurora, played by Shirley MacLaine, is an overbearing, controlling woman who has little tolerance for the free-spirited ways of her daughter, played by Debra Winger. Early in the film she refuses to attend Emma’s wedding because she feels Emma’s new husband Flap is not worthy of her. This strained relationship between Aurora and her son-in-law is one of the underlying themes of the movie.

The story traces the lives of Emma and Flap through the births of three children, two job-related relocations to new communities, and marital infidelity committed by both husband and wife. Somehow they manage to keep their marriage together over the years even though Aurora constantly tries to push them apart.

Though Aurora is judgmental and unloving much of the time, Emma remains close to her, always managing to tolerate her mother’s manipulative behavior. In fact, the two women often confide in one another over the phone and share moments of tenderness as they listen to each other’s stories.

But the movie takes a sudden heart-wrenching turn when Emma is diagnosed with cancer. Aurora rises to the occasion by traveling to be at her side and to help care for the grandchildren. Emma’s condition quickly deteriorates when chemotherapy fails and it becomes clear that she has little time left.

The most painful and heartbreaking scene of the movie occurs when Emma says goodbye to her two sons, the oldest of whom is angry and hostile toward her. She tells him not to feel bad some day in the future when he misses her and recalls that he never told her he loved her, because she already knows that he does love her. This moment is so poignant and real that it makes the entire movie worth viewing, in my opinion. The redemption the mother offers to her son, too young to understand his own behavior, is pure and beautiful, a reminder to each of us that our omissions and failures from early in life have already been forgiven by those who have loved us.

While the death scene itself was memorable for me 30 years ago when I had never actually seen anyone die, upon this second viewing I felt some disappointment. Emma died in a sterile hospital room with her mother and Flap present. But at the moment of her death, when she turned to look at her mother one last time, Aurora turned her head away and Flap was sound asleep. Neither of them was aware that Emma had died until the nurse arrived and informed them that she was gone.

From my current perspective on life, that scene leaves much to be desired, though it is a fitting depiction of our society’s attitude toward death in the 1980’s when it was filmed. Aurora’s turning away from her daughter’s final gaze recalls the turning away of our attention from the face of death, our denial of the reality of death and our refusal to accept death’s approach.

But that rejection of the notion of death, which was acceptable when “Terms of Endearment” was made, is no longer appropriate. Our society has come of age now and we must take responsibility for our lives and our deaths. This movie serves as a reminder that we have only just begun to look death squarely in the eye and make the most of this life that we are meant to lose.