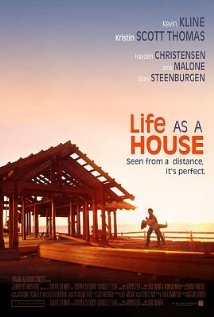 Life as a House, a 2001 film directed by Irwin Winkler is one of my all-time favorite end-of-life movies. Kevin Kline stars as George, an unhappy architect, who is fired from his job and diagnosed with terminal cancer all in one day. He decides to use the last 3 to 4 months of his life to build the house of his dreams on a picturesque piece of land overlooking the ocean.

Before he can build the house however he must tear down the old shack his father built on that same land. He lives in his garage while he works on the project and forces his 16-year-old glue-sniffing, disaffected, punk son Sam to move in with him to help with the project.

George’s ex-wife Robin becomes intrigued by the construction process and soon joins in to help out and be closer to her son. But George has not revealed his cancer to anyone and tells them that the pain medication he takes is for an old back injury, a lie that becomes increasingly difficult to maintain.

The emotional dynamics of this set-up are intense, as George races against time to tear down the past and build the new house he has dreamt of for the past 20 years. He is also trying to build a relationship with Sam to experience closeness with him one last time before he dies.

Tearing down the old shack on the property is symbolic for George of healing his shattered relationship with his deceased father – a relationship fraught with abuse and alcoholism. George begins to experience happiness for the first time in years as he pursues this physical labor that allows him to heal spiritually.

George also recognizes that he himself has not been a good father to Sam and was not a good husband to Robin, whom he still loves. His diligent work on the new house represents his attempts to create a new identity for himself and new relationships before his death.

Through the course of this deeply touching film each of the characters transforms in his or her own way as the new house is slowly constructed. Eventually George’s cancer is revealed, just before he becomes too ill to continue his building project, but Sam and other characters are on board to carry on the work.

While the movie has a few small flaws in its portrayal of the dying process, they are far overshadowed by the depiction of the emotional and spiritual growth that can occur at the end-of-life. It is a tale of redemption, forgiveness, healing and atonement that leaves one heart-broken, inspired, tearful and uplifted all at once.

If I were to teach a course on death and dying, Life as a House would be mandatory viewing as part of the curriculum. Everyone should see this movie!