Forgiveness part 4: The weight of unforgiveness 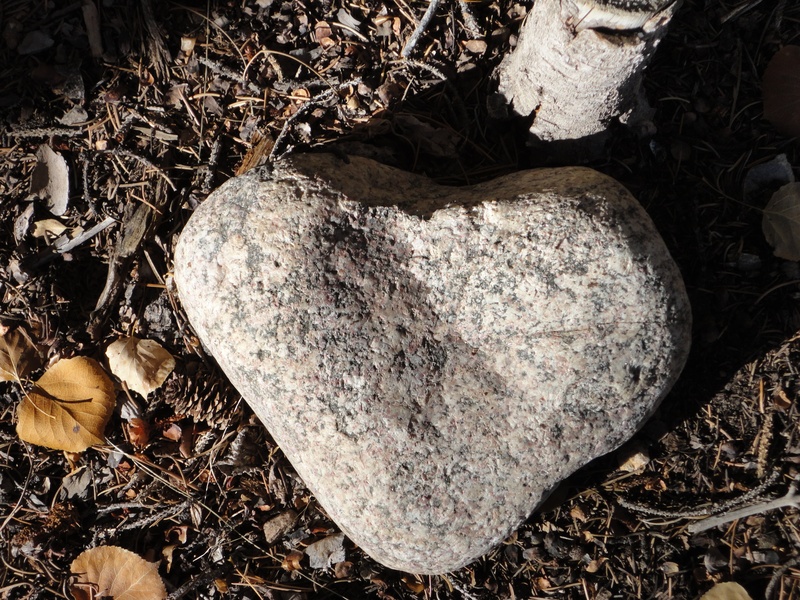 One day last summer I had a chance to contemplate the merits of forgiveness while I was running on a mountain trail near my home. When I reached the top of the trail where it crossed a stream I stopped to enjoy the scenery and spotted a large heart-shaped rock in the woods.

For the past three years I have been planting and tending a Forgiveness Garden in my yard and I have been collecting heart-shaped rocks to scatter throughout and around the garden. I knew this rock would be perfect for the border of my little garden plot so I decided to bring it down the mountain with me.

The rock weighed about ten pounds but I am fairly strong so I was certain I could carry it with no problem. I found, however, that the rock seemed to become heavier and heavier as I made my way down the trail. I couldn’t run while I was toting it so I had to walk, which meant that the entire journey took much longer than usual. My arms grew tired and my hands were becoming raw and abraded from holding onto the rough surface of the stone.

Suddenly, in the midst of my discomfort over this task I had taken on I recognized that the rock represented for me all that I have not yet forgiven. The weight of that stone in my hands was burdening me just like the anger and resentment I carried in my heart. I stopped for a moment to take a rest and contemplate this symbolism.

Holding onto unhealed bitterness is indeed like carrying a heavy weight with you everywhere you go: it slows you down, dominates your thoughts, causes your body to react in pain and discomfort, and prevents you from doing other important work because it drains your energy.

I knew I could just drop the rock and leave it behind at any moment, freeing me from my temporary discomfort; but the resentment I carried inside could not be dropped so easily. Once I understood that the rock was a literal manifestation of my failure to forgive, I was determined to carry it all the way to the garden.

I began to contemplate what might be hidden deep inside of me, untouched by the act of forgiveness. And one-by-one as I unearthed those little hurts and disappointments and wounds I began to transfer them to the rock. That rock became the actual repository of old pain that needed to be cleared away and I found great joy in carrying it the rest of the way.

The pain in my hands, arms and shoulders became tolerable because it represented the pain of genuine, heartfelt work, releasing all the negativity within me. My fatigue, rapid breathing and perspiration were other symbols of this labor of love and redemption. The rock almost seemed to be pulling the bitterness out of me and absorbing the pain into its cool, impenetrable surface.

When I finally reached my garden, so grateful that this journey was complete, I sat and considered the rock for a few more moments. As I placed it next to the Columbine I had planted to symbolize forgiving my father’s suicide, I felt a rush of joy run through me. Carrying that rock down the mountain, saturating it with my unhealed pain, and finally setting it down within the boundaries of my tiny garden was a forgiveness ritual that surpassed every other attempt I had made to release my anger.

As I walked away from the garden, I knew that my work was just beginning and many more mountain journeys would be required to finish the task I had started. But when the wind blew my hair and I reached to gather it, a smile graced my lips and a little song stirred in my heart; for this is the joy of releasing the weight of unforgiveness, the joy of healing and letting go of the past, the joy of dwelling right here, right now in the perfection of this present moment.

Part 1: Why bother to forgive?

Part 2: How to forgive using the 4-View Process

Part 3: The forgiveness garden and other rituals for letting go of resentment